Fuwa, the parent company of Australian subsidiary Fuwa K-Hitch, has recently partnered with US company, Trax Mechanical Systems. All axle components for Trax will now be manufactured in the new state-of-the-art Fuwa Factory in Taishan, China, before assembly is carried out at the new Trax plant in North America.

Trax Mechanical Systems is led by President and CEO, Sergio Carvalho. Trax will now supply steer, trailer and drive axles, air suspensions, brakes and trailer landing gear to both OEMs and to the after-market. The new Traxium line of axles and landing gear was launched for the first time at this year’s Mid America Trucking Show in Louisville. These axles will be available in a full variety of specs for both standard and heavy-duty applications; and extended service brakes and e-coated brake shoes will be fitted as standard.

In February, Trax opened a new 100,000 square foot factory in Louisville, Kentucky – its first North American plant. It is here that all final axle assembly will take place, as well as brake shoe re-manufacturing. Although axle components will be manufactured in Fuwa’s new Taishan Business Park, axles will be made to suit all North American standards by a team that is largely American. 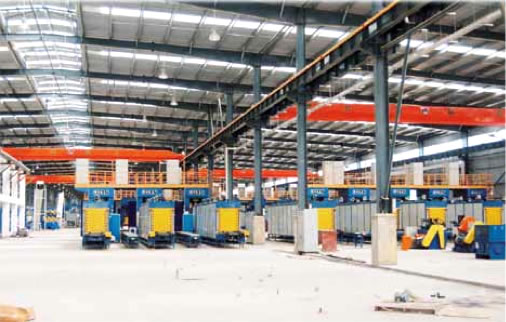 Located an hour out of Hong Kong, the Taishan facility is nearing completion. It will be the largest axle manufacturing plant in the world and will help double Fuwa’s current manufacturing capacity. Fuwa has invested Euro 150 million in this new state-of-the-art facility that will feature 12 separate factories stretching for more than 1.5 km and will include the most modern gear cutting equipment with lapping and grinding capabilities and the latest generation carburizing furnaces combined with the most up to date manufacturing and audit processes available. Currently, Fuwa manufactures between 500,000–600,000 axles a year. The Taishan facility will allow the company to manufacture approximately 600,000 more axles per annum. It will be the launching pad to Fuwa’s move into truck systems including front steer axles, drive axles, drive suspensions as well as new semi trailer running gear products for the European and Australian markets.

Fuwa is already a dominant player in trailer axle manufacturing. In China, Fuwa already has a 70 percent market share of the trailer axle market and this recent expansion is set to make this share climb even further. As well as its position in China, Fuwa also has a strong market presence in Australia, South-East Asia, South America and South Africa. Approximately 30 percent of the total sales from Fuwa are currently derived from exports, however Fuwa hopes to increase the share of exports to over 50 percent to help further its position as a global player. Australia’s Fuwa K-Hitch has also been making a splash over the past few months. At this year’s International Truck, Trailer & Equipment Show in March, Fuwa K-Hitch showcased a wide range of new releases including heavy-duty 150mm unitised axles, pusher and tag axle suspension, KT250T suspension, and a new Weweller heavy-duty suspension. Fuwa K-Hitch has indicated that more new releases are set to follow in coming months for trailers and trucks, as well as the after-market.

One reply to this article